I believe a spell was cast over us this morning when we walked into the airport. The 4 am sunrise was shining through the glass at Terminal A as we stepped out of the Friendly Cab and toward the Delta check-in counter.

We were all tired, but filled with a frenetic excitement for the trip ahead of us. The sweet beckoning of the ocean, sand, and sun were enough to pull us out of our dreams.

Our ticketing attendant was incredibly upbeat for the hour. She was either punch drunk like us from a lack of sleep or ramping up for the day ahead working on Christmas Eve day...or maybe a real Christmas enthusiast who still leaves out cookies for Santa and wakes of early to try to catch him going up the chimney. In any case, she was ready for us, and happy to see us.

"Merry Christmas," she said, "Can I see your ID's please," and grabbed our passports. "Ewww, where are you going?" Mexico my husband Mitchel replied. "Sayulita."

"That's kind of funny for Christmas, the warm weather and all," she said, typing on her keyboard and then turning to retrieve our luggage stickers>

"We're Jewish," I said. Feeling like I made her feel bad I changed the subject. "Will it be crazy today?"

"All in a day's work," she said. "I am glad to be the first stop for folks who are about to go somewhere special."

"That's an awesome way to look at it," I said starting to really love this woman.

"It's all what you make it," she said. "Attitude is everything."

As we made our way up the escalator toward the security line, I turned to my family and said, "I thought about giving her one of the Posi+ivi+y Bracelet I had brought with me to give away on this trip. The bracelets are an awareness and fundraising campaign that is inspired by Ann Murray Paige , a great friend, amazing cancer warrior, and incredibly positive soul. The idea of the bracelets is that you give them away. For this trip my plan was to take three and give them away during my journey if the feeling hit me.

The baggage attendant certainly exemplified positivity...but somehow it seemed to soon in my trip to be giving one away, and anyway we were now facing a very long line at security.

But then another little elf came along with a clipboard and told us to go to the empty line up ahead for "priority passengers" since we were traveling with children. I looked around in disbelief. I couldn't believe that none of the others in the long line were traveling with children. My little gems shone even brighter when we walked right up to the TSA agent and then didn't have to go through the dreaded x-ray scanner.

We were of to a great start.

With plenty of time to spare, we ate a light breakfast, made a few potty pit stops, and waited briefly at Terminal 5 before getting on the plane to Los Angeles.

Each of our girls wanted a window seat so we split up in adult kid pairs. After getting settled into our seats I noticed that the stewardesses were not in the aisles as they are usually before take off. There was a brief welcome message over the PA, and I heard the stewardess ask the folks a few rows up in the exit seats if they were comfortable opening the doors in case of an emergency, but then no safety demonstration followed. The next announcement was to say there was a mechanical issue with the light for the door. They would be checking it out but we had to hold take-off until it was resolved.

Mitchel got upset. "We have a connection to Mexico," he told two flight attendants as they walked by us, as if they could do anything about it.

"What time is your next flight," the younger one with thick blue eyeliner asked.

They both seemed to consider the time.

"You should be okay," the other woman said. "There are people back there," she gesturing toward the back of the plane,” that have a 9 am connection. They might need to be worried."

I wanted to remind Mitchel about our friend at the ticket counter this morning. There was no need to go to the what-ifs just yet. We were okay in the moment and there was nothing we could do to change the situation so our attitude would determine our experience.

But the next announcement over the PA challenged this again.

"This is your Captain folks. It seems like that although we know the door to be closed; the light continues to indicate that it is open. We have cleaned it and checked it out but we will need to shut down the plane completely and have you all unload and see if we can reset it. We are sorry for your inconvenience."

Mitchel lost it a bit with this news and yanked at Marley's backpack when she was having trouble getting it out from under the seat. Realizing that he was a little rough I saw something flash over his mind, perhaps a reminder of our goals to work together. I was certainly frustrated too, but at that time I still believed that we would get to our flight and destination.

Returning to the terminal, Mitchel (brilliantly) beeline it for the terminal desk. He was going to check with them about our connecting flight. It is lucky that he was standing there because only a few minutes later, a male flight attendant came to the mic and announced that the issue was still unresolved. They were cancelling the flight.

In my mind I was catapulted into our family's favorite show, "The Amazing Race." We needed a new flight fast. One of us had to get our luggage while the other one worked on changing our flights. The kids would need to be safe and entertained.

But it quickly became clear looking at Mitchel's posture and face that we weren't going anywhere fast.

The next 3+ hours were spent with three different Delta employees trying to find a way to get us all to Mexico. The holiday combo of having less flights running and more people wanting to go places was not working in our favor. We tried all kinds of options. Driving to SF or San Jose. Flying to Atlanta and then to Puerto Vallarta. Spending the night in LA and traveling the next day. Checking every carrier, considering flying into Guadalajara and renting a car to drive the 412 miles to our destination, or even rerouting to Maui where we had a free place to stay with my brother.

But none of them, even the terrible options, was even a possibility. There were not four seats until December 28th - four days after our planned departure.

Though the outlook was not good, we four remained relative calm. Part was shell shock of our new reality, but I do think that a small part of the spell cast over us that morning was to believe that things were going to happen no matter what, but it was up to us to decide how we were going to feel and react that mattered most.

We stuck together. We held an impromptu family meeting and came up with a plan we could live with, although it would not have been anything we would have chosen. My husband and older daughter Marley would fly the next day. Me and my daughter Ruby would have to wait two more days.

We would be broken apart. Our vacation would be cut short. There would be money and time lost and expectations shattered.

But we kept our chins up. For me, my mind was flooded by thoughts of others that weren't doing so well this holiday season. Jacy, a fellow spin instructor, mom, wife and teacher who was recently diagnosed with leukemia, Ann Paige and her fight, and all my loved ones that aren't even here on this earth anymore. I don't know what was going on for the others in my family but it seemed that all of us were keenly aware of how very lucky we were to even be going on this trip.

We passed along a bright green posi+ivi+y bracelet to Giselly Montoya, the wonderful gate agent that stayed with us long after the others had abandoned our cause. Told her the story of the bracelets and thanked her for her time and efforts and then went to spend the $25 in food vouchers given to help kiss our you-know-whats. 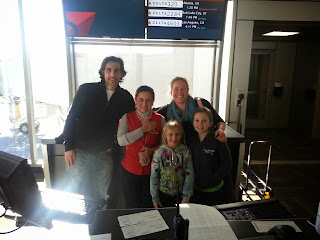 ***
Tonight I am in a hotel 15 miles from my house. My younger daughter is asleep in the next bed over. My husband and daughter have arrived safely and are in Sayulita Mexico sleeping next to the Pacific.

Although it was not the way we planned it - our Christmas was a nice one. It was a Jewish girls classic - a movie and Chinese--pretty fun and not something that would have happened organically. We got to take our dog on a surprise walk, so that part of our family was happy too. We even got a ride and more time with the king of positivity, Ben Finkelor. He is someone who really looks for the silver lining, and is good at reminding others of these often overlooked and underappreciated life gems.

Arriving at our hotel, and relatively stuck (it being Christmas and the hotel being in an unpopulated area) we decided that we would order Room Service. It would be Ruby's first time and she was thrilled. While we waited for food we would go to the hot tub.

But then again we were foiled. The hot tub was broken and room service and the restaurant closed. Ruby was visibly bummed, her little frame slumping and her smiley face turned down.

"I'm so sorry," the hotel clerk said over and over again. She could see Ruby's sadness too.

"We'll be okay," I said, scooting Ruby away from the desk. I was saying it more to convince myself, crestfallen that my little girl was disappointed again.

"I'll make us a fun dinner from our plane snack bag," I told Ruby as we went up the elevator. "And we will watch something fun on TV while we eat."

And then, looking for the silver lining we found it - in the form of the ice machine. Ruby's eyes lit up. She loves hotels. And she loves ice. And the ice machine is a little bit of both. 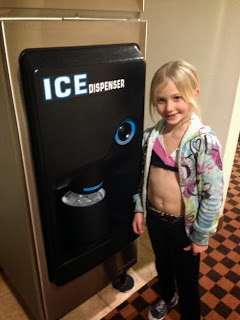 So we went to the room, got our ice container, and still in our dry swimsuits, we got some ice, ate our snack food dinner, and watched a Christmas Ice Age special on TV.

So wish us well that tomorrow we join our family on the beach. And may I wish you all very hearty, healthy, happy holidays! May we all find the attitude of gratitude for things big and small and fill the season with big hearts full of joy and peace! 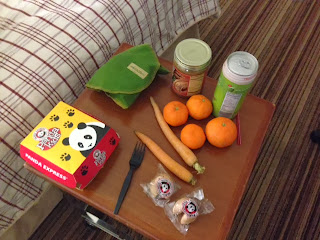 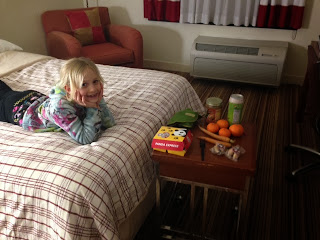 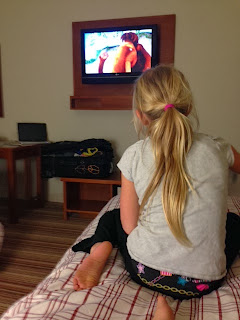